well, made it to NOLA and back on my pretty pink 2-stroke!  no serious issues on the way home, besides being exhausted.  we rode for 12 hours the first day of the return.  there were some long breaks, but still, sheesh!  it did make the last day only 150 miles.  that was great.  made it easier to be ready for my interview today.  one thing at a time though…

this is my posse.  from left to right…christine, our support vehicle driver (very flexible driver!), myself, suellen (rode my bikes), kitteridge (mp3), sue (her bike was the one that burned to the ground…Kymco was super cool though, they gave her a bike to ride home), john hopkins (burgman), mark anderson (mp3 – GPS master!), alice steele (kawasaki and THE coolest 63 year old you have EVER met!)

here is my victory photo.  i tried to get a more “in the air” shot.  but it is harder than it seems.  and i was already hot and tired, i didn’t want to keep jumping up and down in the air.  proud though.  i am very proud of what we did.  what i was able to do.  that was a LOT of miles.  and it is such a cute scooter! 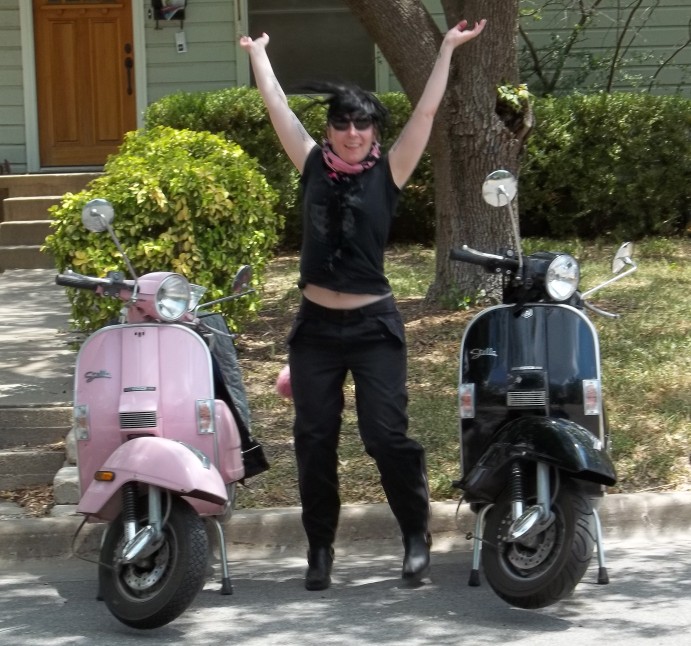 new orleans was amazing.  i seriously want to move there.  no, seriously.  it would take me 2 years to get a compact license.  but maybe i can just sit for the La NCLEX?  or get into administration?  alice works for the state of CA and says they would love to have people like me.  the beauty around me is really important to my sense of peace.  europe is beautiful.  NOLA is beautiful.  and i am sure i would get use to the humidity.  the people who live there obviously do.  anyhow, riding around was fun, though cobblestones get old quickly.  having coffee at cafe du monde and listening to bands playing in the street.  the architecture!  the food is yummy, though i did start to miss veggies a lot.  it was great to see all sorts of old friends, though weird too.  i talk about patrick a lot.  especially at scooter events.  that obviously makes people feel it is ok to talk about him.  they shared a lot about what is going on in his life right now.  things seem to be really really good for him.  he has a house, a nice car, lots of scooters, he got a big huge job offer and does all sorts of scooter design stuff.  i try to stay positive about it.  it is awesome to hear how great things have become for him.  but then i feel weird cause things aren’t so great for me.  kind of makes me think that there is something wrong with me.  same thing with christine, only she is the patrick in her divorce.  though she feels things are hard, everything is going the right direction in her life.  new men, a job, a new degree, a new home.  brent did lots of mean things to her and now she is getting to move on to the life she has deserved.  same with patrick.  but i seem to be going the wrong direction.  my life has certainly not gotten better since things ended with patrick.  that must mean that i was the horrible one.  the one holding him back.  and now i am getting what i deserve.  and yet, i really do feel like i am a good person.  i help people because i can.  but even christine said that i intimidate people.  my posse thanked me with a card and money for a massage at the end of the ride.  but i don’t understand why.  they said they wouldn’t have been able to do it without me, but i don’t believe that.  and, in fact, i think that i annoyed them quite a bit with my concerns over route and such (though i did warn them my bikes would be slow).  do i just make REALLY bad decisions?  am i just unlucky?  i tend to believe we have control over our lives and positions.  so it seems more likely to me that it is something i am doing wrong.  but i don’t know what.  to simply say i am too assertive is too vague.  especially when people look towards me to lead.  it feels like a catch-22.  anyhow, i have heard a bunch more bad data on the economy and i keep reading articles on how the nursing field has a glut of new nurses and they are having a difficult time finding jobs.  i don’t want to have fought this hard to end up at the mercy of anyone that will help me.

my interview went well today.  i really clicked with two of the managers whose teams i would be working with.  they were very process oriented.  the man that would be my boss is very finance.  just basic data in, analysis done, info out.  not as exciting as the stuff i was talking to the other managers about.  the VP was very straight-forward.  he looked at my resume and said give me examples of your SAP knowledge, data mgmt experience and MS office expertise.  but i liked his style and philosophy.  i told the boss that i was rusty and it would take a bit for me to ramp up.  he said AMD was different and it took him 3 months to ramp up when he joined.  he said they would talk at the end of today, just briefly, and he would call me by the end of the week with an update.  he also said he wanted to interview some more people but needed to work more with HR.  i think they were hoping i would be a slam dunk, and i am not.  but i also think they really liked me.  i wouldn’t be too surprised if i got a call on a job in a different group.  i am just so scared of being alone right now.  my resources and options are dwindling.  there is only me.  i have to take care of me.

here is a photo of the couple i want to be when i grow old.  they bought the hearse on eBay.  the paris license plate too.  they have never been pulled over for it.  at the rally, the rode two-up.  they wore formal wear to the banquet.  his tux even had tails!  they are SO cool! 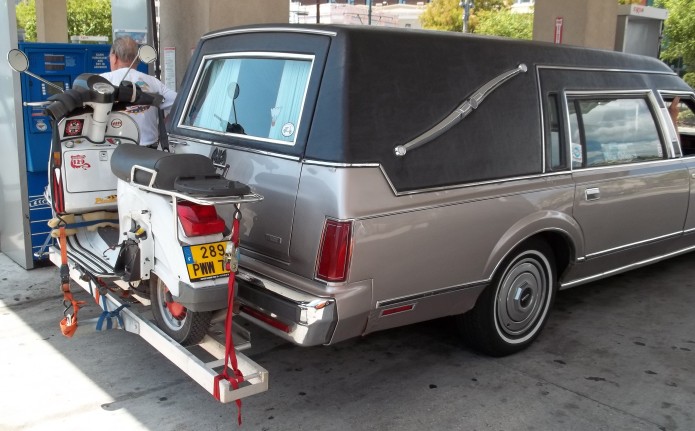