laid down last night at 10, woke up at 6am this morning. sure, it was a nice deep sleep (though some how i ache) but DAMN i didn’t mean to just pass-out like that. must have been at all the 4am mornings watching true blood.

my summer begins NOW! summer school is done. just gotta wait out the next month. my planned activities are as follows:
-yoga (have a 1 month pass for Eastside Yoga)
-fit foods 21-day challenge (see below)
-borrow Rosetta Stone from library (German and French (if time))
-varnish the cats good!
-bake, bake, bake
-watch a lot of netflix

the fit foods 21-day challenge: there is a new business in town where they make perfectly balanced individual meals you can buy 3 days or so in advance (or freeze for 2 weeks). they use the 40-40-20 pyramid. it is suppose to get you off high carb/sugar/fat foods, give you more energy and reset your metabolism. they say, on average, customers lose 8-12lbs in that period. though i would like to get under 130, i am really interested in resetting my palate. i found out about it because the company dropped a bunch of samples at andreas’ office yesterday and he brought me some. had the hawaiian chicken last night and it was yummy! the small meals run abut $6.25 a piece. i had a medium sized meal last night and it was too big. eating out one will easily spend $6.25, so it seems cost effective that way. sure, i might be able to cook cheaper for myself (though remember i have to buy organic or near-organic food so my food bill is a lot higher), but, i tend not to. anyhow, i am excited.

the was from the most recent steampunk night at elysium. andreas came as a british just back from safari!

got an 88 on my english final. had my first day of my new MOW route! awesome day!

i am at my favorite coffee shop, reading a great vampire book, with delicious tea and not a responsibility in the world (sort of) for month. this is awesome. only someone rubbing my feet would make it better. oh, and the winning lottery numbers.

got this from my washington post afternoon update
Rep. James Hines (D-Conn.) on on the rhetoric regarding government spending:

“…it’s awfully easy to say what the American people want to hear right now, which is that we need to get out fiscal house in order. Nobody disputes that. We’ve got way too much debt, our entitlement programs are in a scary situation. What’s hard is what you say next.”

sent my mom an email sharing with her the amazing news about my essay. she sent back the most awesome reply:

Subject: Re: you are never going to believe this…

i got my last essay back from my english teacher. it was an argument essay. i argued that the US must change our policies on immigration, who decides on science funding and the funding of pure research to remain the science and technology leaders. i got 99/100. the teacher wants to submit the paper to the textbook company as an example. can you believe it? of course, i always argue well, but i am surprised she thought it was a structurally great paper. i struggled a lot. anyhow, yeah for me!

and, by the way, for the first time in my life, i have beautiful and luscious hair. i have breck girl hair. when i brush it is moves in a beautiful wave. i wonder if this will last. it sure is awesome.

my body is so out of whack i am back on the c. cocktails. had one last night and 2 today. i hope everything goes back to normal soon. i really want to work on eating better with this month i have left. i know the yoga i plan to do will help. big changes coming, but i am ready for them. i just need my tummy to get with the program.

the raquel, in black, by minna parikka 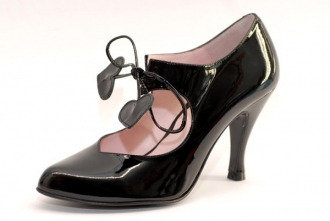 last essay done! now all i have is the timed writing final. not stressed about that as i have no idea the topic. i have no control so why stress. if i get a C or better on this last essay, i will REALLY not stress. in the end, it wasn’t bad. i still rail against the standard and unbelievably boring format. but my writing is better. i have slowed down and started to stress less about reviewing my work.

i think one of my struggles in life is this sense that i need to do better by society. that i can’t just sit here and suck up oxygen. i have to give back. by that i don’t mean just volunteering or something. i mean that i want to make society better in everything i do. having learned recently how much energy americans use, more than anyone else in the world, i now feel guilty for having my air conditioner set at 74. if i want to throw out an aluminum can instead of bringing it home to recycle, i feel HORRIBLY guilty! even the papers from my dry cleaning (which i limit as much as possible) i am fanatical about recycling.

i am thinking seriously about changing my name. what do you think of Heather A Black vs Heather A Smith? Nurse Smith? Nurse Black? i bet they will call me nurse heather.

i have written about the texas schools on a number of occasions. i fear they are going the way of the CA schools. the CA schools were going in the right direction there, for a while. when they mandated 20-1 (20 kids to one teacher) it was a huge improvement. but they have abandoned that. christine will have like 35 kids in her class this fall. anyhow, texas struggles with our prisons too. i read grits for breakfast, a texas legal blog which tracks the prison situation and generally all things legal. the author references CA a decent amount there too. he recently posted an entry called education-vs-prisons which included the following graph: 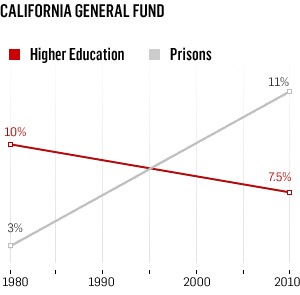 now that summer school is done i will be:
-using my one-month unlimited yoga coupon at eastside yoga
-baking my little heart out
-studying german using the rosetta stone software (i figure my best chance at finding a job in europe is in germany, so i had better conquer the language, oh, and i am dating a german guy, whose mother doesn’t speak any english and i really like her a lot)
-offering myself to anyone that needs something super organized
-dotting my Is and crossing my Ts before school starts
-varnishing the cats!

at least she thinks so…

Palin invents word ‘refudiate,’ compares herself to Shakespeare
By Matt DeLong at The Washington Post
The Twittersphere erupted Sunday when former Alaska Gov. Sarah Palin tweeted that “peaceful Muslims” should “refudiate” the mosque being built in New York City near where the Twin Towers once stood. Palin found herself the butt of many tweets, as refudiate, of course, is not a word in the English language.

After deleting the offending tweet, Palin replaced it with another calling on “peaceful New Yorkers” to “refute the Ground Zero mosque plan,” which only added to the confusion because it would appear the word she was looking for was “repudiate.” Then came the kicker: To quell the vicious Twitter-ribbing she was receiving, Palin unleashed yet another tweet comparing herself to no less than the Bard of Avon.

Her tweet: “”Refudiate,” “misunderestimate,” “wee wee’d up.” English is a living language. Shakespeare likes to coin new words too. Got to celebrate it!”

Naturally, this led to a very entertaining Twitter meme, #ShakesPalin, in which participants revamped classic Shakespeare quotes, Palin-style (and of which The Cato Institute’s Julian Sanchez was arguably the champion (see below)).

A good time had by all.

As a postscript, Mediaite points out that this is not the first time Palin has used the word “refudiate.” (Watch at the 1:05 mark).

To suffer the slings and arrows of outrageous liberals, or to quit halfterm, and by opposing, rake in speaking fees
#shakespalin
about 22 hours ago via Twittelator