i really need to get better at this blogging thing…

kitten cuteness…the kitten covers. and whomever did this, has excellent taste in music.

think i failed my endocrine exam. which sucks, because i studied really hard. and i thought i understood it. and i really like the teacher. everyone was blown away though.  i am never alone in these things.  hopefully that means they will throw out a bunch of questions. why do i get 98s on pedi and 72s on med surg? i find med surg SO much more interesting.

my friends brooke and sarah both want me to use them as references for applying to a nurse tech position at st david’s here in austin. that was awesome.  and i shall do that on wednesday.  i am sacred about my future, but i am not freaking out.  i realize, a lot of you can’t imagine that i freak out.  but i do.  just inside my head. and occasionally to people VERY close to me.

i attend a movie in a friend’s backyard this weekend (with my luscious boy toy even!).  it was V for Vendetta. and, wow, is that movie relevant or what? ok, we aren’t quite at that totalitarian extreme, but every time they used the word “rendition”, i thought of bush’s, then obama’s, “extraordinary rendition”. i realize there are details that we don’t know. details we can’t know. and i know that there is a minimum level of security that i want from my government, that might entail doing some “bad” things. but are we slouching towards gomorrah? the movie is based in the UK but the US has found itself in a bad way. a way that sounds entirely possible:

mind you, i don’t think god (or a lack thereof) is what is doing it to us. i think it is us doing it to us.  anyhow, it makes me think a lot about the occupy wall st people.  i would love to join them.  but i think the best thing i can do for society right now is finish my degree. and yet, are there other ways i can support them?  is what they are doing worth it?  i am afraid, if they finally give up (which they will have to as their resources are hardly infinite), it will only embolden the bankers and financiers that the american people were too apathetic to join them.  it will say we aren’t afraid of what corporate finance is doing to us and we are willing to take it.  i think that is a bad thing.  my friend, and boy toy, ross and i have been discussing this.  only the smartest boy toys for me (seriously, he is an econ major and wants to get a graduate degree in it.  how business/economy nerdy is that?!).  anyhow, our discussion has had me thinking deeply on the subject of how we effect change.

then, my friend troy posted an economist article (hmmm, there is that word-root again..econ…) that explained very well the debt rise and fall. repent at leisure. i don’t find it earth shattering, it is pretty basic finance and banking. but i also think it is put nicely. i guess the big question is…who is going to lose? creditors? the elderly, poor and unemployed? even i agree austerity is needed, but where? (i just hope i end up on the other side soon) the problem with the article though, it doesn’t suggest a solution. a friend of troy’s linked one of the RSA videos about WHY it all happened (a perspective, at least) crisis of capitalism (can’t figure out how to imbed it. the page on youtube doesn’t have the regular options in this case). and i like this even more (cause i have always been a ‘why’ person). at this point, for the rest of what i am going to say, you really need to watch the video… i agree with the guy. but i also think that his argument, a marxist one, is the same as putting together pieces of all the other “genres” (will make sense once you watch it). i think my bottom line is people are selfish. they will do what they have to in order to get more for themselves and their “loved ones”. that being the case, how do we level the playing field, assuming we can get everyone to agree that people living and dying in the streets after the ultimate marginalization is a bad thing? i don’t want to over regulate. is a tax on net worth, my friend troy’s idea, (minus retirement savings, since that is capped yearly and taxed when you take it out) appropriate? i wish that i cared so much about finance/banking/accounting/economics to have dedicated my life to finding a better way. but i just don’t feel that strongly about anything. which isn’t a bad thing. the world needs some middle ground people too. anyhow, here is our photo from watching the film…one of the guests printed out guy fawkes masks for us all! 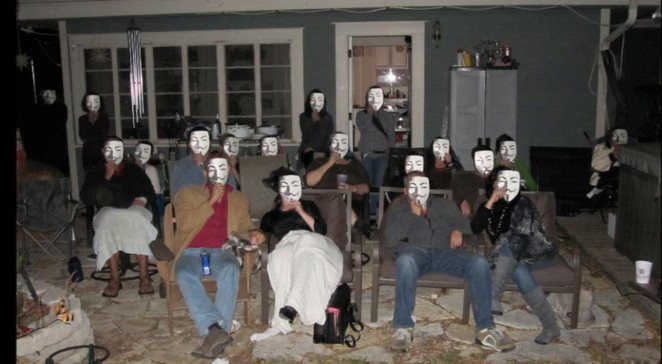