all my stuff got moved into mo’s house. it was a pretty good move (thanks again to katie, randy and the teenagers). my chain main dress arrived. scooters are getting fixed. started my sewing courses and LOVE THEM! totally going to learn to sew. anyone wanna chip in on a sewing machine for my birthday? i am looking at the kenmoore that we use at school. they cost $199 at sears.

now the really exciting thing that happened recently is, i won the “sexy back” contest at “geeks who drink” WHICH resulted in a date with a totally cute boy! tonight i went to geeks who drink with karl, his girlfriend and a couple of other friends of his. i missed his birthday event, so i wanted to buy him a beer. i didn’t help the team with any questions (karl is AMAZING at trivia) but i made the team proud on stage! 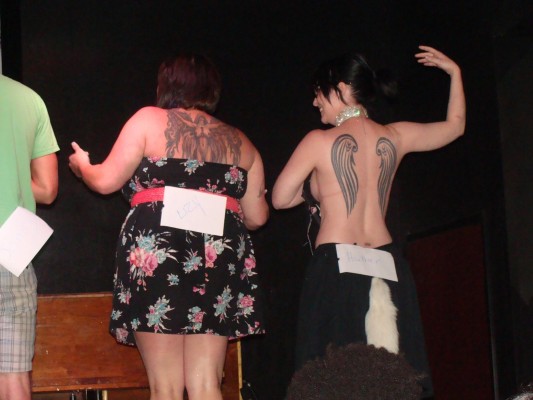 so where does the date part come in?  well, to the right of me is a table facing the stage.  they were enough in front of me, they didn’t see my back at all.  but they did get a special view as i took my shirt off.  i even joked with them as i was standing there.  near the end of the quiz, one of my table mates got a text that he shared with me.  it said, “is heather available?”  he showed it to me and i giggled and texted back “yes she is!”  had no idea who was asking, but i was tickled.  anyhow…after the quiz was over, another text was received that described what the boy looked like, “salt and pepper hair, glasses, t-shirt jeans and tennis shoes”.  i knew exactly who it was!  one of the boys at the table facing the stage!  and i had thought he was cute even before i won my prize!  i went over to chat with the table.  as they hadn’t seen the tattoo, i showed it to them: 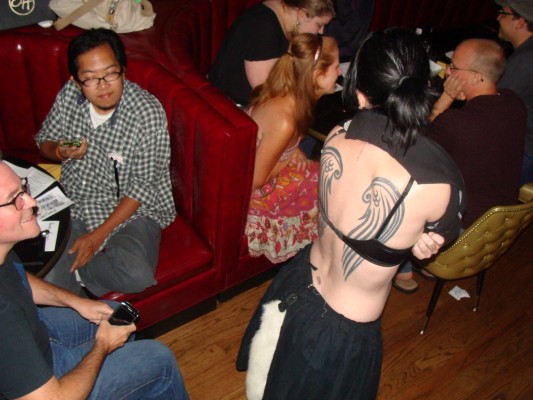 matt is the gentleman on the left side of the photo with the glasses and the smile.  he asked me for my number and i totally gave it to him!  so excited!  what an awesome way to meet someone.  i mean, even if we only bond over the quiz and my ease at taking my shirt off in public, it was fun and giggly.

1 thought on “lots of stuff has happened”